So all I really want for Christmas, is a 4K video camera…

For a while now, the Panasonic GH-4 has been the gold standard of low-priced, 4k video cameras (compared to Professional Cameras like the RED or the ARRI Alexa).  But at $1200+ for just the body, getting a complete, ready to shoot outfit is a $2000 excercise…  You need lenses, new high-speed MicroSD cards, etc… Even with Black Friday and Cyber Monday prices… Well, as someone who is not (currently) getting paid to shoot 4k video, that’s a pretty expensive hobby!

So in the middle of my “I need a DSLR-style camera that is going to meet my needs for the next 2-4 years” dilemma, Panasonic releases the Lumix DMC-G7. Yeeessss!

Because let’s face it: There are a couple other cameras in that price bracket that claim to do 4K video.. Heck even a GoPro can do it for $400 or less… So what’s going to trip me up with the G7? After all, I really like the Canon EOS 70d, but it burned me (twice!) on a recent video shoot by stopping in the middle of recording! In fact, I had to redo the interview, which I really didn’t have time for!

So I went ahead and ponied up the $800 for a G7, to tentatively test it out and see what the gotcha’s were. Sure, the marketing materials look great and it’s got the main things I need covered, but will it work for what I am doing? That’s the question.

BUT WAIT, WHO ARE YOU, ANYWAY?

And now you are wondering, what the heck -are- you doing, and is it anything like what I want to do?

30 seconds of background on me: I love photography and have had film and digital cameras for as long as I can remember. But professionally, I work in audio and video: TV, events, installations, etc… I even helped to build an early HD TV truck back when a display alone cost $10k, and they were not very good at all. So basically, I love the industry and the mediums, but I am pretty spoiled on professional level features and performance. I know what is possible, and I try and get the most Pro mileage out of lower priced gear.

So going into this, my dream camera (that’s affordable anyway) would have been a Lumix GH-4… Kind of the gold standard of lower-cost 4k video. BUT I also love to take photos, so the photo portion of the camera still needs to work great, AND my wife (who is moderately skilled at such things) needs to be able to use it too.

Panasonic Lumix G7 Review – Cyber Monday 2015
The Panasonic Lumix DMC-G7 leads it's price class with on-board 4k video recording, interchangeable lenses, and a terrific price, even when it's not on sale! If you are a videographer who also like to shoot photos, this camera is the one you want. (Unless you can afford a GH-4).
sysadmin
8.5 Total Score
Excellent! - 4K Video on a shoestring

The Panasonic Lumix DMC-G7 leads it's price class with on-board 4k video recording, interchangeable lenses, and a terrific price, even when it's not on sale! If you are a videographer who also like to shoot photos, this camera is the one you want. (Unless you can afford a GH-4). 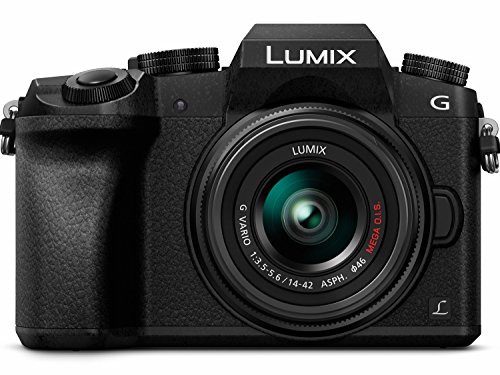 WHAT I LOVE ABOUT THIS PRODUCT:

I get clarity and resolution of the 4k chip, even when I am just recording regular HD. Score! Plus when I am at Yellowstone park or something like that, I can do my cinematic nature videos and such at 4K! Bonus! Heck, my computer hardly plays it back well (and that’s another post).. But I can record it!

2 – As a photo camera, it’s pretty solid in the image quality department.

I will say however, that sometimes I feel like the shots can be noisier than my Canon EOS 70d for the same situation. I suspect that is because the sensor is bigger… But for a great video camera, it takes a pretty sweet looking photo… And it’s heads and tails above my iphone 6. BUT I consider myself an 80% video guy and 20% photo guy for using this. If I was mostly shooting photos, there are better cameras for that at this price point (but they don’t do video as well, even 4k aside.)

3 – It has an external microphone input.

No matter how beautiful video is, if you don’t have good audio, the whole thing seems shabby. I’ll bet you don’t notice a high-resolution video on Youtube when the audio sounds like they are talking into a trash can, or you hear more background noise than the person talking. SO, G7 has a stereo mic input to allow you to solve that problem (and trust me, you WANT to solve that problem.)

4 – It focuses fast and well on both photo and video.

My goal is to be able to see a great shot, and shot it without flash, and have it look great, on no-flash automatic mode. Does the G7 deliver? So, overall it does this well, and the focus is usually bang on… And it tracks on video, which is important, since usually it’s just me recording myself, and getting done and finding out it’s out of focus just stinks…

The HDMI output can go all the way to 4K, with or without menus and info on it. HOWEVER, when you press record for video, the feed goes dark… But if you need to record that feed, just turn off auto-shutoff, and record 4k (or less) video with an external device all day long.

6 – Most importantly —> It didn’t BURN me when I was recording video.

When I was using the Canon EOS 70d, it would just stop either for no apparent reason, or it had reached the 29:59 minute mark, and it was SILENT when it did so.. No shutter noise, no beep.. NADA.. ZIP.. NOTHING.. As a result, there I was just interviewing away, with no indication that I was WASTING MY TIME, not to mention the person I was interviewing over Skype’s time…

So how is the G7 different you ask? Well, first, when you have an external monitor hooked up to HDMI and you press record, the external monitor goes black and says “RECORDING video” This is annoying for a different reason, but this is also good for verification.

Secondly, it BEEPS. Loudly if you like. It beeps when it starts, It beeps when it stops, even if it’s stopping on it’s own. So unless you mute the beeping (which I don’t recommend, but you can do it..) you will know if you are talking along and suddenly your camera goes out to lunch during your video. YEESS!

Ok, so I wish that it recorded longer than 29:59… But that is a problem with virtually all pro-sumer photo cameras on the market that do video. AND with the G7 (unlike the Canon 70d) you can get around it!! Simply invest $300 in an external recorder like the ninja or the HyperDeck Shuttle, and record 4K and such until you run out of disk space, even if it’s two days later.

What else do I love?

Enough on all that.. You know the good stuff, what about the dingy underside?

Why do you care? Well, it means you cannot fire up Lightroom or some other program on your computer, and grab RAW shots right into the software, which is great for portrait shooting and such. However, all the other Lumix cameras have eventually supported better USB functions, and I wouldn’t be suprised if the G7 gets this feature in a few months (fingers crossed). Again, if you really want an awesome still camera that does video 20% of the time, you can do better than the G7. But since this is a video camera first, I will live with shooting and dumping.. Plus the wifi stuff on the camera is awesome. You can also hook the camera up to an HD external monitor and view the photo in high-res anyway as well, which is practically tethering anyway…

This just means you need to use extra care to make sure external audio stuff doesn’t clip the camera inputs. Plus it takes more effort to calibrate your gain structure… Annoying, but I’m not sending the camera back either…

WHAT DOES IT ALL MEAN? (Conclusion…)

If you need an amazing, interchangeable lens 4K Video Camera, that is also a solid photo camera for under $800 (and possibly closer to $600), the Panasonic Lumix DMC-G7 is what you want this season.

Keep in mind, that the camera itself is only part of the journey. I’ve put together some helpful bundles of the best accessories (for the money) that you should seriously consider, if you don’t already have them. 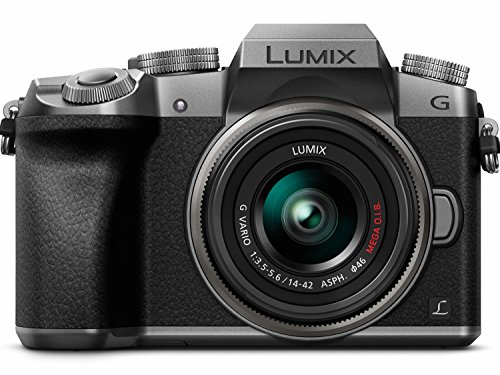 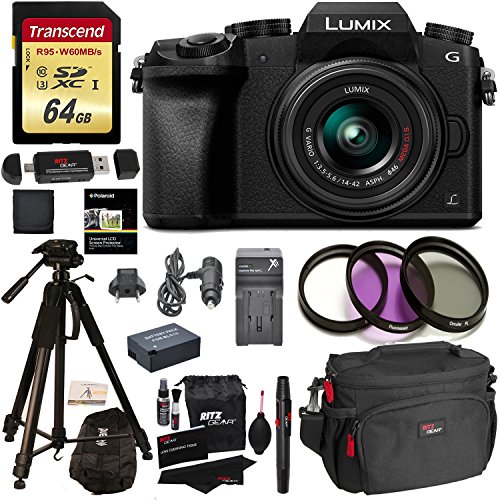 Panasonic Lumix DMC-G7 Pricing: http://amzn.to/1R9tsRl My facebook page: https://www.facebook.com/learnaboutvideo?ref=hl -this review is tailored to those ...

The Panasonic GH4 is one of TCSTV's favourite cameras for video, and a very underrated one for stills. The new Panasonic G7 gives you all the GH4's still ...

We get hands-on with our Panasonic G7 review. Taking a look at its Mirrorless Micro 4/3 image sensor. Testing its creative filters, dynamic range settings, ...

Related Articles
We will be happy to see your thoughts